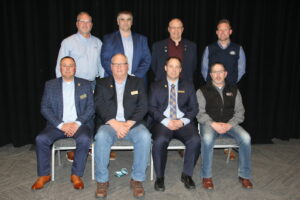 MPPA Board members are elected to three-year terms and work on behalf of Minnesota’s pig farmers to bring visionary leadership for its members by influencing public policy on a local, state and national level.

Leadership roles remained the same with John Anderson of Belgrade serving as MPPA president, Vince Baack as vice-president, and Adam Barka of Sleepy Eye as secretary.

“The Minnesota Pork Producers Association Board of Directors is diverse, representing the broad range of farms found throughout the state,” says president Anderson. “I’ve enjoyed leading the group these last two years and look forward to working on behalf of our members and partners through the next year.”

For more information on Minnesota Pig Farmers, find us on: facebook twitter pinterest
Preisler to Retire as CEO of Minnesota PorkWolters, Stevermer, and Malakowsky Lead National Pork Producers Council
Scroll to top
Share this ArticleLike this article? Email it to a friend!
Email sent!