Press releases about Minnesota Pork Producers Association can be found below.

For the first time, the International Agency for Research on Cancer (IARC) included in a report on agents causing cancer the relative risk of getting the disease, a significant development, according to numerous observers at a recent meeting of the group.

The World Health Organization agency at an Oct. 6-13 meeting in Lyon, France, concluded that the relative risk of contracting cancer from consuming red or processed meat is low. 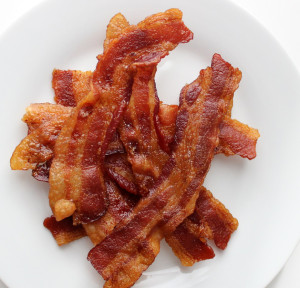 “You know, my mother used to say, ‘Everything in moderation,’” said National Pork Producers Council President Dr. Ron Prestage, a veterinarian and pork producer from Camden, S.C. “She was a very smart woman, and the smart people out there know you don’t eat a pound of anything every day. So take this IARC report with a grain of salt, but not too much salt because that would be bad for you.”

The IARC classifications on meat, said NPPC, were reached after including studies that did not have statistically significant results, meaning the conclusions are questionable. In fact, IARC’s conclusions were based on “relatively weak statistical associations from epidemiological studies that were not designed to show cause and effect.” In many of the studies, cancer risks were only associated with high levels of consumption.

In a May 2015 review of epidemiological studies on cancer and meat, David Klurfeld, with the U.S. Department of Agriculture’s Agricultural Research Service, found: “Most observational studies report small, increased relative risks [of cancer]. However, there are many limitations of such studies, including inability to accurately estimate intake, lack of pre-specified hypotheses, multiple comparisons, and confounding from many factors – including body weight, fruit/vegetable intake, physical activity, smoking, and alcohol – that correlate significantly either positively or negatively with meat intake and limit the reliability of conclusions from these studies.”

IARC did note that most colorectal cancers are caused by more than one agent and that cancer trends are related to the amount of an agent or agents consumed. A monograph on the agency’s conclusions is expected to be published next summer or fall.

NPPC, which had a representative at the IARC meeting, said many studies show that eating lean, protein-packed and nutrient-dense processed meats such as ham can help fight obesity, which is universally accepted as one of the leading causes of cancer.

According to the National Institutes of Health’s National Cancer Institute, obesity and physical inactivity may account for 25 to 30 percent of several major cancers, including colon cancer. The institute has noted that a 2002 “major” review of observational trials showed that physical activity reduced colon cancer risk by 50 percent: www.cancer.gov/about-cancer/causes-prevention/risk/obesity/obesity-fact-sheet.

WASHINGTON, D.C., Feb. 19, 2015 – The National Pork Producers Council today criticized recommendations related to meat in the diet from an advisory committee informing the creation of federal guidelines for healthy eating.

In a report for the 2015 Dietary Guidelines for Americans, an Obama administration-appointed advisory committee of health and nutrition professionals recommended that people consume less red and processed meat, and it omitted lean meat from its recommended dietary pattern. (It did maintain the Recommended Daily Allowance of 5.5 ounces of “protein foods.”) The panel recommended moderate amounts of alcohol.
Additionally, the advisory committee concluded that a diet higher in plant-based and lower in animal-based foods would be more environmentally sustainable.

The report was sent to the secretaries of Agriculture and of Health and Human Services, who will use it to develop the 2015 guidelines. Due out later this year, the guidelines affect all federal food purchasing programs, including the School Lunch program.

“We think the advisory committee has taken the wrong approach,” said NPPC President Dr. Howard Hill, a veterinarian and pork producer from Cambridge, Iowa. “Science recognizes that meat is, and should be, a part of a healthful diet, and NPPC urges the USDA and HHS secretaries to keep meat in the center of America’s plate.

“It appears the advisory committee was more interested in addressing what’s trendy among foodies than providing science-based advice for the average American’s diet,” Hill said. “Have we really come to the point where alcohol is okay and meat isn’t”?

NPPC pointed out in comments on the 2015 guidelines that animal proteins are considered complete proteins, containing all the essential amino acids, according to the Centers for Disease Control and Prevention. A number of critical vitamins and minerals, including B12, Heme iron and potassium – often lacking in many American diets – are found primarily in meat, and lean, nutrient-rich meat is versatile, affordable and accessible, making it easy to incorporate into the diet.

For school children, eating meat promotes satiety and preserves lean muscle mass, said NPPC. Additionally, including lean meat in their diets can help adults prevent or manage chronic illnesses such as diabetes, cardiovascular disease and hypertension. Research even shows that, for those dealing with obesity, many cuts of meat can improve long-term weight maintenance.

As for sustainability, said Hill, “pork producers today are much more environmentally friendly than even 25 years ago. In fact, a U.N. report (starting on page 278) on greenhouse gases cited intensive agricultural production, such as the modern U.S. meat production system, as a way to address those gases.”
According to North Carolina research firm Camco, compared with 50 years ago, U.S. pork producers today are using 78 percent less land and 45 percent less water to produce a pound of pork and have a 35 percent smaller carbon footprint.

# # #
NPPC is the global voice for the U.S. pork industry, protecting the livelihoods of America’s 67,000 pork producers, who abide by ethical principles in caring for their animals, in protecting the environment and public health and in providing safe, wholesome, nutritious pork products to consumers worldwide. For more information, visit www.nppc.org.

Mankato, Minn.–  The White House announced new funding for the U.S. Department of Agriculture and the U.S. Food and Drug Administration including $77 million towards research efforts to help combat antibiotic-resistant bacteria and $47 million to evaluate antibiotic stewardship in animal agriculture.

The executive branch last year released a report on strategies to address antibiotic-resistant bacteria, recognizing that the main drivers of resistance are “not completely clear” and that more research is needed to understand the issue. Other reports on resistance, including a recent one from the Centers for Disease Control and Prevention, have focused on antibiotics use in human medicine.

The pork industry, through the Pork Checkoff, has provided significant research dollars to projects aimed at identifying products or practices that will help minimize the need for antibiotics. It also has an antimicrobial stewardship program, which is part of the Pork Quality Assurance Plus (PQA Plus) program, that provides guidance on antimicrobial use and includes on-farm assessments to measure the effectiveness of stewardship efforts.

Additionally, farmers, veterinarians and feed suppliers are working to comply with Food and Drug Administration Guidance 213, which eliminates the use of antibiotics for growth promotion that are important in human medicine.

“Pig farmers are always looking for new and better ways to ensure the well-being of their animals and produce a safe product,” Preisler said, “and they work with their veterinarian to develop herd health plans that include responsible and proper use of antibiotics to keep animals healthy.

The Minnesota Pork Producers act with integrity to provide visionary leadership through advocacy for members. Minnesota pork producers work to establish the pork industry as a responsible supplier of high quality pork. Membership in the MPPA is through voluntary enrollment programs.

WASHINGTON, D.C., Jan. 23, 2013 – The National Pork Producers Council congratulated two pork farmers who yesterday were named Faces of Farming and Ranching national spokespeople by the U.S. Farmers & Ranchers Alliance. Chris Chinn, from Clarence, Mo., and Bo Stone, from Rowland, N.C., earned two of the four spots in a nationwide competition conducted by the alliance, which includes more than 80 farmers and ranchers organizations.

“An effective traceability system is critical to our nation’s animal health infrastructure and is one of the components the World Organization for Animal Health considers essential for an effective veterinary services program,” said NPPC President R.C. Hunt, a pork producer from Wilson, N.C. “The goal of a traceability system is trace back of an animal to its farm of origin within 48 hours of the discovery of a disease. That would allow a disease to be brought under control and eradicated more quickly, saving animals – and taxpayer dollars – and keeping foreign markets open to our exports.”